I've been ruminating a lot about bots recently, and whether all of these new machine learning products are actually artificial intelligence, or if AI is little more than pattern recognition, as complex as it can be.  And while we're marketed plenty of products that clearly aren't actually intelligent (which of course begs the question what exactly we mean by "intelligence"), the one field that has a vested interest in mimicking human emotional response is the world of chatbots.

I use chatbots every day for my job in marketing, and I wanted to share a list of some of the most valuable chatbots I've found, why they're useful, and how much they cost. During a fascinating Slack meetup last week, I was interested to learn that people are now spending more time on messaging services than on social media, which is a profound change in how we used the internet.  Even more intriguing is that a growing number of conversations that take place through Hipchat, Facebook Messenger, AIM and slack are now conducted with automated messaging robots called chatbots, which are built to make developers', salespeoples' and marketers' jobs easier by executing specific commands directly from within one messaging service, rather than navigating across multiple platforms.

Here are some of the best chatbots I have found for marketing that will make my job easier in 2017.

Statsbot is one of my first and favorite chatbots, allowing me to query both Google Analytics and Salesforce, as well as to set up recurring reports and alerts at a specified time of day, week or month, and finally to set certain alerts if benchmark metrics are not achieved, or thresholds crossed.  Statsbot understands fairly complex complex commands, and has become a vital tool for reporting and business insight.

Cost: The free version is quite powerful, though the paid version is affordable and well worth the cost, with tiers at $5, 15 and $25 per month a pop.

Workbot is sort of an IFTTT for Slack, connecting over 150 platforms to the messaging service, from GitHub to Quickbooks to Docusign.  You can run simple commands in each app, as well as set up complex recipes from using everything from notifications to resolve issues assigned to you about your codebase, when invoices are created, or a contract is signed. 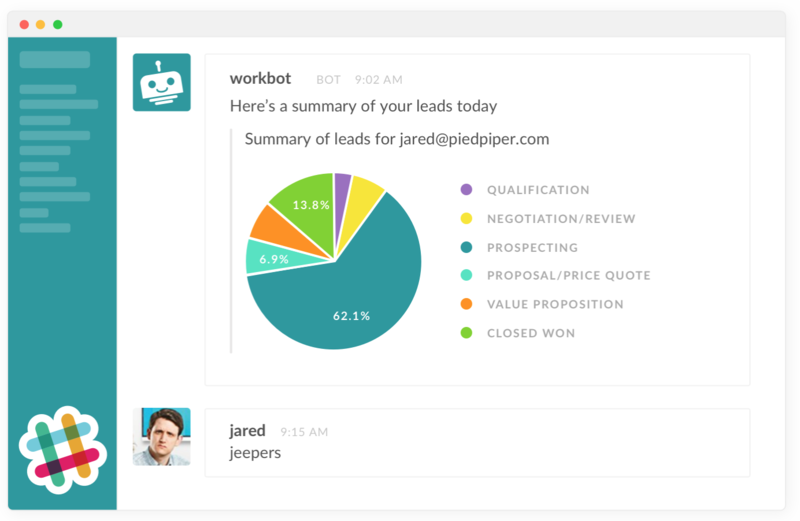 Cost: Workbot is cool, but the free version is close to useless, and the next tiers are $99 and then $499 per month, limiting its use to enterprise power users.  I can't justify the costs personally, though the tool is quite powerful.

Senders is actually an email plugin with a chatbot that offers the same functionality to query information about someone using their email.  Senders creates a professional Rapportive-like card for anyone who emails you, including links to their website, social media profiles, as well as any recent blog entries or social posts that person or person's company might have made.  Though they push users to volunteer information to complete on online profile, it's a great way to get a little information about the sender of any email and where they work.

Trello is a great (and mostly free) project management software, that I've used across several companies for years. Trello uses a simple Kanban board of cards and categories, allowing you to assign tasks and project to different team members, track the progress, and attach documents and collateral all to cards that move across a board.  The Trello slack bot allows you to update information and progress on each card, reassign users or even move cards around according to the status of the project.

Revealbot is a really compelling bot that allows you to not only manage and report on Facebook advertising spend, but also supposedly optimize and automate some of the work that goes into running an effective social media campaign. Similar to bid optimization scripts in Adwords, Reveal claims to allow users to not only report and manage Facebook Ad Spend, but run slash commands and schedule rules to optimize campaigns, for example to cut a budget if the Cost Per Acquisition crosses a higher than desired threshold. 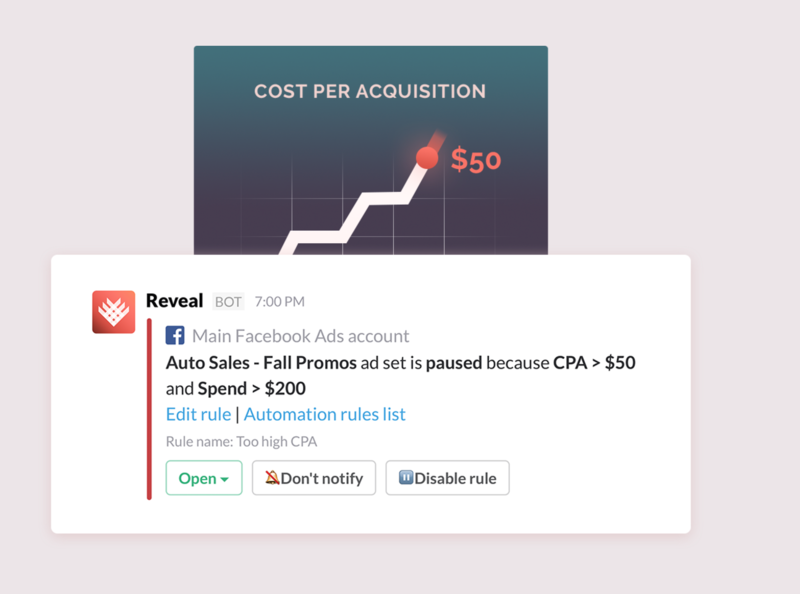 Cost: There are a number of different platforms starting at $10/mo

Taskbot is a very simple text input-based project management bot, where you can keep simple "To Do" lists. I mostly use the native @slackbot's slash commands of /remind me {date} project, but taskbot offers a few additional features like keeping a running list of tasks in a given channel as well as assigning responsibility to more than one team member.

Growthbot was built by the founder and CTO of Hubspot.  Though I believe you need to actually need to be a Hubspot customer to access any of the real marketing and sales tool, Growthbot looks like it can integrated with Google Analytics, and do anything from disseminate content to a blog, to pulling up client records from your Hubspot CRM, without leaving the comfort of your very own Slack community. 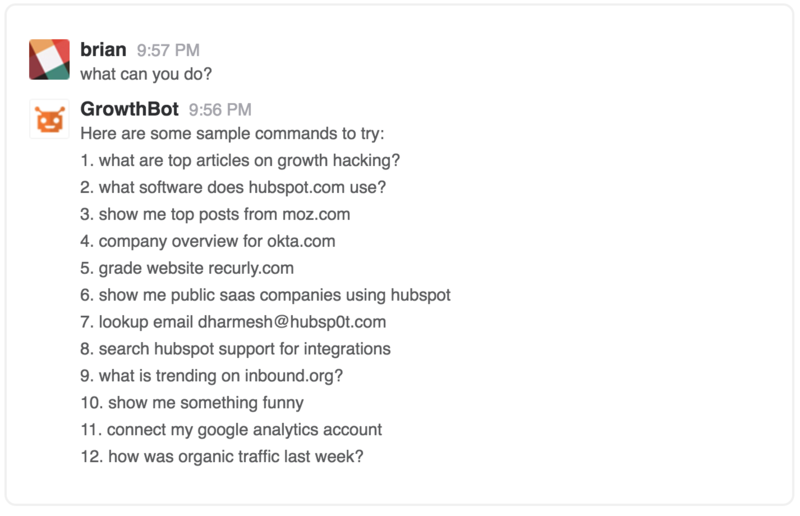 Cost: The bot is free; Hubspot is not.

Arcbot is really used for the purposes of making quick Google Analytics queries on the fly, as well as scheduling simple GA reports.  You can set up daily reports for anything from sessions to bounce rate, and how that metric or dimension might have changed from a previous time period.  I used Arcbot quite a bit until I found most of it's functionality replaced by Statsbot.

Domain Research is an is an ICANN-accredited registrar, allowing potential entrepreneurs to request the availability of domain names. They do collect data on searches, though assure users that information is confidential, making money with partnerships between registrars and other vendors they refer.

Slack has a very nifty native (and very underutilized imo) /call slash command, which when I started using Slack a couple years ago, was the final nail in the coffin of Skype, allowing you to initiate a free voice call to any team member.  However, until very recently there was no native video chat to the messaging service, and though you could easily initiate a Google /hangout, the command launched a third party browser-based video call.  Slack recently purchased Screenhero, to integrate Join.me and TeamViewer functionality (i.e. not just video calling, but screensharing, presentation and remote desktop.

Cost: Unclear as of yet.

Troops is a chatbot that I just installed a week ago, and I'm quite impressed to far... Fundamentally, troops allows you to pull basic (up to 5 fields) from any Salesforce reports, and schedule a Slackbot to regularly run that report at a given interval.  You can get daily reports of leads created, to monthly opportunities closed by owner.  You can also search your Salesforce Org from directly within Slack, and one of the neatest features is called a "Gong," alerting users to any opportunities won, as soon as they happen. 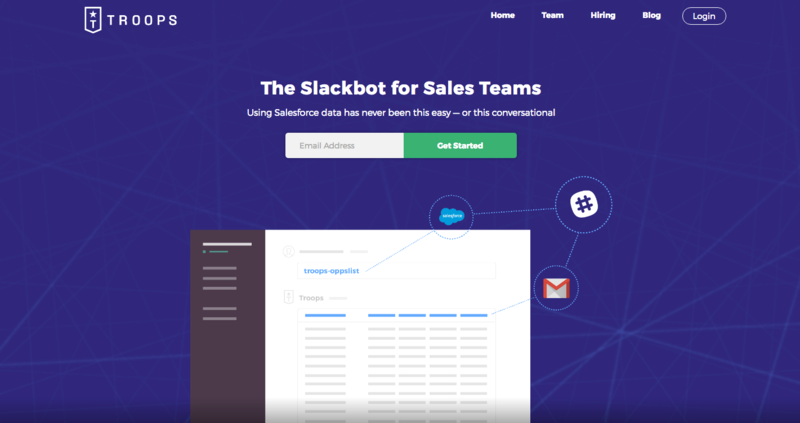 If you have an awesome Slackbot that is useful for marketing, please let me know and I'd love to check it out!