Nine in 10 (91%) US email users have subscribed to a company’s email and later decided they don’t want to receive it, according to [pdf] a new report from Exact Target and CoTweet. Data from “The Social Break-up” also indicates 18% of email users say they never open email from companies, and 77% of all US online consumers say they have become more cautious in the past year about giving their email addresses to companies.

Despite the above statistics, email use in general remains extremely popular with US online consumers. A full 95% use email, and 93% subscribe to at least one permission-based email per day. Forty-two percent of those subscribers say they are more likely to buy a company’s products once they have signed up for its permission-based email.

Study data indicates that when online consumers are no longer interested in a company’s permission-based emails, they get right to the point. Two-thirds (67%) simply unsubscribe. Another 17% delete the emails when they arrive, and 8% click a spam or junk button.

More passively, 6% simply do nothing. Two percent take the action of setting up a filter.

The most common complaint given by consumers as a reason they unsubscribe from a company’s permission-based emails is that they come too frequently (54%). Another 49% (more than one answer permitted to this question) cite the content becoming boring or repetitive over time. Receiving too many emails closely follows, being cited by 47% of respondents.

After these three reasons, the percentages drop significantly. Twenty-five percent of respondents say they unsubscribe because the content wasn’t relevant from the start, and 24% prefer to seek out information rather than have it pushed by companies. Another 22% only signed up for a one-time offer, with smaller percentages citing changing circumstances, switching to another company, and finding another way of getting the information.

Four in 10 global marketers (43%) use email segmentation to personalize messages by audience, according to a recent survey from Alterian. Another 44% are still employing email blasts of some kind, although 26% use basic personalization and 18% blast out on a mass basis. 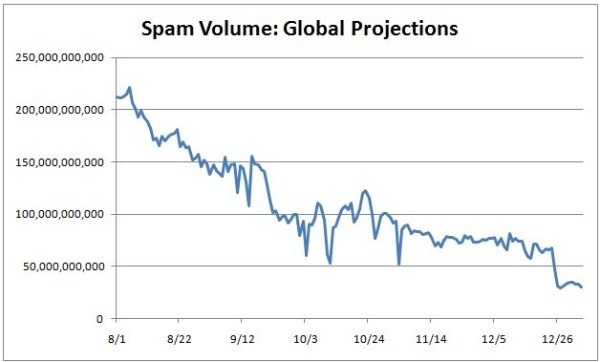 via theatlantic.com
Apparently, email is now ever more passé with usage increasing only in senior citizens according to the metric below.  Facebook's aptly-named Fmail is the newest communication platform trying stick it to Gmail, but also accommodate the desire for instant information gratification, and of course to remain technologically hip, and thus relevant to new consumers.
However, I think this is a misguided attempt to identify a trend.  Yahoo and Hotmail are on the decline becaue they aren't flexible platforms, and because I get he feeling that they are constantly trying to sell me something.  And,  I don't see any single medium supplanting email, as the telephone did the letter.  Instant messaging has existed for decades in a variety of incarnations ranging from AIM to the almighty pager, as has the video-conferencing capabilities of Skype.  I remember seeing a video-phone in elementary school (and if I remember correctly the pricetag at that time was over a thousand dollars).
The greatest recent shift in communication technology has really been bandwith and computing power, so people are able to share and collaborate more, faster.  Photographs, videos, and chat rooms are not new.  Only now, we have all of these things simultaneously whilst  on the train to work.  But, I do not see email being replaced any time soon, only adapted to more seamlessly integrate more robust mixed-media. 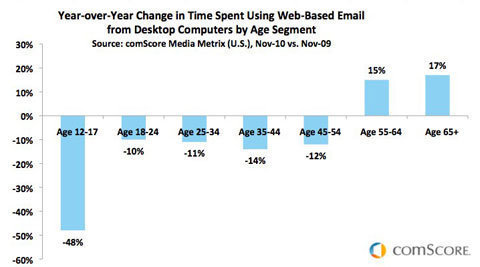