UNTIL recently, real estate brokers in New York City rarely shared information about one another’s listings. As a result, buyers had no way of knowing whether their agent was showing them every property available, and sellers wondered whether their homes were getting the exposure necessary to secure the best deal. 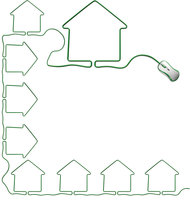 Companies like StreetEasy, Zillow and The New York Times have helped open up the market by gathering listing information from various real estate databases and making it easy for consumers to search for homes online. But many brokerages still display only the firm’s exclusive listings on their Web sites — either because they are focusing on selling their own properties or resigned to the fact that customers have migrated elsewhere to research what is on the market.

Other brokerage firms are getting into the digital game themselves, creating a “virtual office Web site” or VOW. These are sites operated by brokers that enable clients to search for most of the available properties in a particular market, not just the firm’s exclusive listings.

While brokers have mixed feelings about whether these sites are worth the investment, the emergence of the VOW is yet another sign that once tightly guarded listing information has finally been set free in New York.

“Five years ago, protecting listings was the single most important thing, and people were very selective about where their listings ended up,” said Eric Gordon, the managing director of RealPlus, which develops VOWs for clients as well as operating the listings database used by members of the Real Estate Board of New York. “Now they want us to send their listings to every site we could possibly send them to. There are exceptions, but in general, the feeling is, ‘just get our listings out there as quickly and efficiently as possible.’ ”

The virtual office Web site concept was spurred by a 2008 settlement between the Justice Department and the National Association of Realtors, which forced brokerages to share listing data with their rivals, including Internet-based firms that offer rebates or other discounts to buyers willing to do most of the legwork to find a home.

In most parts of the country, brokers share information about properties through a multiple listing service, or M.L.S., a database operated by a real estate association on behalf of its members. Although Manhattan, Queens, Brooklyn and the Bronx each have a multiple listing service, many agents in New York City are not members and instead participate in a similar service managed by the Real Estate Board of New York, called R.L.S.

Agents who belong to these services are typically required to share property information with other brokers within a day or two of signing an exclusive listing, and these databases now share listings with each other as well as sites like StreetEasy, The New York Times, and hundreds of national and international portals like Yahoo and Google.

Sites like StreetEasy have free rein to publish listing information online for customers to search, aggregating data from various sources to create fairly comprehensive databases of properties available in New York City, including homes for sale by owner. But if brokerages want to post other firms’ listings on their Web sites, they must go through the process of becoming a virtual office Web site.

For prospective buyers the main difference between a VOW and other real estate search sites is that a VOW has to adhere to rules dictated by the Justice Department settlement, including a requirement that customers register with a name, an e-mail address and a password before they can search for listings.

Required registration can be a turn-off, some agents say, especially for casual shoppers.

“The problem I have with VOWs is that they force you to register before you can get information about properties,” said Douglas Heddings, the president of the Heddings Property Group. “To me it seems like a step backward, in that it’s holding the information hostage.”

Although the Heddings Property Group was one of the first firms in New York City to create a virtual office Web site just last year, Mr. Heddings said he was planning to abandon it in favor of a partnership with Buyfolio, a company that allows agents and their customers to search for listings as well as share feedback about properties.

For Buyfolio, a relatively new company focusing on the New York market, these collaboration tools are a key selling point. But now that real estate brokerages, technology start-ups like StreetEasy and media companies like The New York Times all have access to the same basic data about listings, the competition to attract buyers searching for homes online is heating up.

“You’ve still got to bring people to your Web site,” said Steven Spinola, the president of the Real Estate Board of New York, or Rebny. “Just creating a VOW doesn’t mean people are going to come and use it.”

So far, 98 of the 484 residential brokerage firms that are members of Rebny have created a virtual office Web site, Mr. Spinola said. This involves paying a fee to have the board audit the site to ensure it complies with the standards, like how client registration is handled and how listings data is managed.

But when the board recently overhauled its own Web site, now called NY1Residential.com, it partnered with the local news channel NY1 and decided not to create a VOW, partly to avoid the registration requirement.

“We made a decision that we weren’t going to ask people to sign in,” Mr. Spinola said. “It was just the sense of the members that they wanted to keep it an open Web site that anyone could search.”

Among New York City real estate firms, there are mixed feelings about whether a VOW delivers enough benefits to justify either the cost of creating one or the trade-offs involved in complying with rules about how these sites interact with clients.

After signing up for a VOW, customers have to wait for an e-mail to confirm that they have registered, and must also agree to terms and conditions that can run as long as a dozen pages. Those terms typically include an acknowledgment that the customer is entering into a lawful consumer-broker relationship with the agency, legally required language that does not obligate the buyer to work with the agency. This can seem like overkill just to search for, say, two-bedroom apartments in Chelsea.

But some brokerages are wagering that the hurdles are worth jumping, that there is money to be made from providing clients with a comprehensive set of properties rather than just the firm’s own listings, the traditional practice. Most VOWs also include tracking features that allow the agency to monitor customers’ searches, potentially producing useful data about what clients are looking for online.

“It was complicated to become a VOW, and it was costly,” said Dottie Herman, the president of Prudential Douglas Elliman. But, she said, the company’s Web site is more client-friendly now, allowing searches for properties in Manhattan, Brooklyn, Queens, Long Island, the Hamptons and Westchester County, including listings from other firms.

As for the registration requirement, Ms. Herman said she would have preferred that it be optional, but she doesn’t view it as a major deterrent. “I think most people don’t have a problem with it, because everybody asks for your e-mail address today,” she said.

Visitors to the Prudential Douglas Elliman site, once they have signed up, can search, sort and save listings. Results are displayed with the firm’s exclusive listings first, then those of other firms. But unlike, say StreetEasy, there is no direct link to the other firm’s site.

Bellmarc Realty is another big firm that is embracing the virtual office approach. Neil Binder, the president of Bellmarc, said that after experimenting with allowing individual agents to offer a VOW, generally using third-party software, the firm decided to develop a company-wide site instead, which will debut once it gets Rebny’s approval.

Mr. Binder said that the Bellmarc agents who tried VOWs created by third-party vendors did not find they generated much business, but he believes the new VOW will be more effective.

“It’s going to be more of an evaluation tool than an information tool,” Mr. Binder said. “I’m trying to create a process of comparison to show how properties stand up next to each other.”

Other large firms in the city are taking a wait-and-see approach. Diane M. Ramirez, the president of Halstead Property, said that about a quarter of the company’s agents had incorporated a VOW into their individual pages, but that Halstead had not developed one for its corporate site.

Corcoran has not jumped on the VOW bandwagon at all, said Pamela Liebman, the company’s president, partly because listing information is already widely available and partly because of doubts about VOWs.

“We’ve watched the traffic of some of the firms that have put VOWs on their site, and from what we can see it hasn’t increased,” Ms. Liebman said, adding that Corcoran also had not experienced an uptick in the number of deals it is doing with buyers’ brokers who have virtual office Web sites.

Beyond basic listing data, real estate Web sites compete for buyers, and page views, by offering additional information: price histories, recorded sales, building details and school district data — as well as discussion forums, mapping tools and features that make it easier to search for homes and then sort the results.

Zillow and The New York Times offer real estate apps for mobile devices, and these mobile users now account for a third of Zillow’s traffic on weekends, said Amy Bohutinsky, the company’s chief marketing officer, a trend that could put VOWs at a disadvantage as more people embrace smartphones.

However, brokers say they are not trying to compete with these sites, which are viewed more as information distributors than rivals, especially at a time when so much data has been digitally set free.

“Now listings are all over the place — all that information is published by a million different sites,” Ms. Herman said. “This is the world we’re in today, and if you don’t embrace change I don’t think you can be in business.”

Buyfolio just launched a collaborative listing search tool between brokers and clients, similar to Streeteasy's Folders.  Buyfolio searches the entire REBNY database of listings, and has a bit of a more robust of a UI, compared to Streeteasy.