via callclareity.com
The problems and solutions in real estate listing syndication.

via techcrunch.com
via scribd.com

Move, Inc. MSN Network is the largest real estate network according to everyone but Zillow This Sunday from New Orleans, we broke the story regarding questionable Zillow claims (via collateral produced by Zillow as ComScore data) being passed around the halls of the 2010 National Association of Realtors trade show floor. The claim in question was Zillow and Yahoo! real estate network being the “Largest Real Estate Network in the World” above and beyond Move Inc./MSN real estate network by nearly 6.4 million unique visitors. We’ve never disputed Zillow/Yahoo! traffic claims, only their representation of competitor traffic, and that of being the largest real estate network.

(This is a followup story to “Zillow dupes Realtors, investors and consumers with flawed claims.”)

Immediately, we noted the Zillow claim that the Move Inc. traffic stats included the 6.4 million uniques when according to other sources, it had not. Zillow’s CRO, Greg Schwartz responded that his contact at ComScore had verified the Zillow numbers to be accurate and requested a retraction- we decided to take it a step further and actually just settle the matter once and for all… who is the largest real estate network?

We went directly to ComScore (the source of both networks’ claims), and simply asked for an independent analysis (specifically avoiding any possibility of tricky math) of what is called deduplicated or “unduplicated” traffic (a fancy word for unique visitors) and the following graph is fact, according to Sr. Director, Industry Analysis Andrew Lipsman (well, we made the graph, he gave us the numbers). We also took it beyond that to show not only July, but also September numbers to settle the old versus new data controversy as well, and here is what we found… What’s most interesting is that Move Inc. is not only larger, but from July to September (60 days) Move Inc. with MSN Real Estate actually grew 1.8 million uniques or 10.7% while Zillow and Yahoo! only inched up around 200k, or 1.3%.

The bottom line is that we want an apples to apples comparison and we’ve delivered one, however, Zillow’s Schwartz is still “reluctant to concede” any problems with their numbers. When we spoke to Schwartz by phone, he insisted that he had verified with ComScore Sr. Sales Manager, Jill Leedom that their numbers were on par and their flyer compared apples to apples, and went as far as emailing AgentGenius the very carefully worded statement from Leedom as follows…

You’ll note this email does not address the July numbers that are in dispute, and you will also notice the difference in reports filed. One report is a Duplication report, and the other is a Key measures report where Ledomm clearly states, “Zillow’s intent was to point out the one included URL”realestate.msn.realtor.com” and not the entire MSN Real Estate Category.” (emphasis ours)

Clearly, Zillow is selling its partnership with Yahoo! real estate, and enthusiastically created collateral to sell their new value proposition, but failed to compare apples to apples. We personally don’t believe they had malicious intent, it is our suspicion that apples (Audience Duplication Report showing Zillow/Yahoo! in a flattering light) were compared to oranges (Key Measures reports showing everyone but Zillow/Yahoo! in a less flattering light) which Schwartz will not confirm as a possibility. However, Move, Inc. and it’s MSN partners did compare apples to apples and they can, because they simply are the largest real estate network.

Does this mean it will last forever? This remains to be seen. The fact is that Move, Inc. and its competitors need one another to continue to push the envelope forward in technology. Zillow combined with Trulia and other players in the space have pushed traditional to become untraditional, rethink longterm strategies, build new alliances, and look beyond today in service offerings to Realtors and consumers. After all, 14.3 million uniques is not a number easily dismissed. 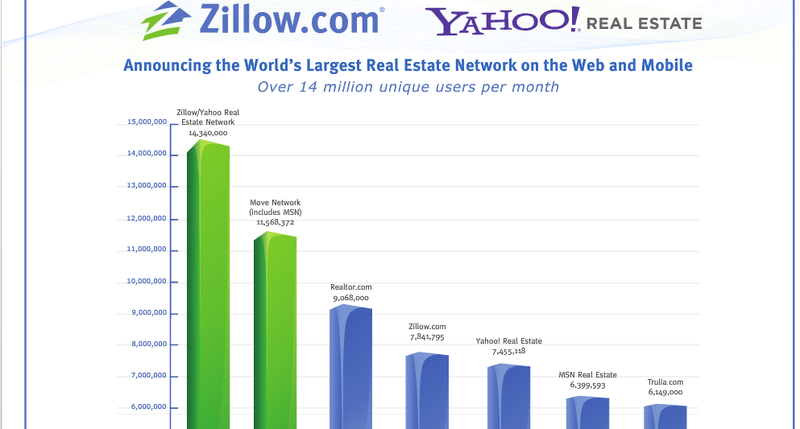